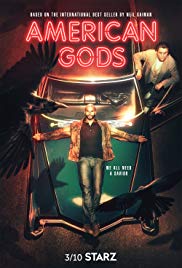 A recently released ex-convict named Shadow meets a mysterious man who calls himself “Wednesday” and who knows more than he first seems to about Shadow’s life and past.

Season 03 Episode 01 — A Winter’s Tale
Wednesday reappears in Shadow’s life, wanting him to continue his war effort; Shadow learns about his destiny after a meeting with the god Wisakedjak.