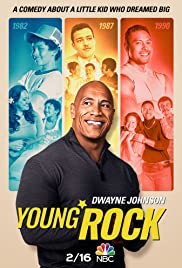 A look at the formative years of superstar Dwayne ‘The Rock’ Johnson as he grows up through life.

Season 02 Episode 01 — Unprecedented Fatherhood
As the 2032 election nears, Dwayne reflects on what it means to be a father. In 1984, little Dewey vies for his father’s attention after Rocky becomes the WWF tag team champ. In 1987, teenage Dwayne arrives in Nashville to unexpected circumstances. In 1996, adult Dwayne struggles in the Canadian Football League.